Rising east of St. Helena, Howell Mountain is Napa Valley's first recognized sub-appellation. Renowned for Cabernet Sauvignon, its vineyards range from 1400 to 2200 feet in altitude. This unique area consist of two main soil types key in defining the character of a Howell Mountain wine. The first soil consists of decompsed volcanic ash, called "tufa", and the second is red clay that is high in iron. Because both soil types are nutrient poor, the vines are stressed and can only develop small berries that produce intense wines of dark purple color. Days are a bit cooler than on the valley below, but because the vineyards sit above the fog that often blankets the valley floor, they enjoy long, mild growing days with slightly warmer nights. Our vineyard sits between 1650 and 1550 feet (top to bottom) on a West-facing slope with a view across the valley to both Spring and Diamond Mountains.

In late 2005, we planted our first block of Cabernet Sauvignon, one acre split between clones 4 and 7, with Clone 4 on rootstock 101-14 and Clone 7 on rootstock 3309. In 2006, we planted our second acre block also to Clones 4 and 7. Finally, in 2007 we added a ½ acre of clone 15 Cabernet Sauvignon to balance Clones 4 and 7, adding complexity to the blend. Every very year, each clone is harvested, fermented and barrel-aged individually for two years and only come together during blending for each new wine. Our vineyard is tightly-spaced, with 3 feet between vines and 5 feet between rows, which requires the vineyard to be maintained entirely by hand. The vines are "cordoned" trained, pruned back to two short canes per vine, and loosely vertical shoot positioned.

Mountainside farming is always challenging. High wind, spring and fall frosts, and hail are all occasional risks. Thin, low-nutrient soils, rapid drainage, and steep slopes all demand extra attention. The elements of sun, temperature and good (that is, bad!!!) soil provides the perfect environment and help give our wine the character, richness and depth for which the wines of Howell Mountain are known.

The beginning of the 2019 growing season was defined by copious rainfall and late soil moisture. The long, warm summer saw very few extreme heat events, with foggy mornings setting the stage for vibrant and expressive wines. The long, relatively mild finish to the season, not without its moments of unpredictability, helped to preserve freshness and finesse in the fruit with abundant hang time teasing out great color, structure and soft tannins. Volume is looking to be about average to a little less than average. All in all, exceptional fruit with bright acidity and ample texture promises an amazing vintage.

The near picture-perfect growing season began in late February. Spring was mild, with extended flowering yielding uniform grape clusters. Temperatures remained steady and warm throughout the growing season, without any significant heat spikes, making for a cool, unhurried harvest. 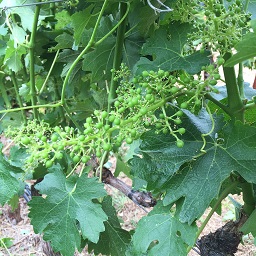 The 2017 growing season started late and was quite cold through the spring. The ground has plenty of energy from the over 80 inches of water received ending our five year drought. The week of June 18th has brought a week of temperatures between 90 and 100 degrees. Early pictures of bloom and fruit set show beautiful large cluster formation with minimal shatter. In the fall the Napa and Sonoma suffered a series of devastating fires.  We were blessed that Howell Mountain was spared and the early tastings in barrel and very exciting.

The 2016 growing season was completely different then the last twenty. Winter rains partially relieved the drought, then a hot spring brought rapid growth, followed by a cool summer. The early start got us ripe about a week later than 2015 and just days ahead of the late October rains that brought the season to an end. The young wines are dark and rich with lots of complexity and structure; a fine reward for the wild ride! Photos are before and after tucking with early, beautiful clusters. 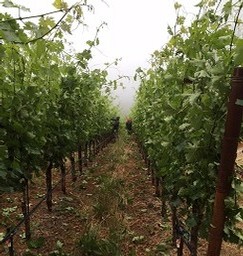 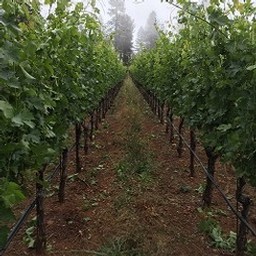 With the dry, hot summer, harvest in Napa Valley came early in October.  We let the grapes hang a bit in hopes of allowing the fruit to ripen even more than it already has - the flavors are full and rounded due to early season shatter, allowing the clusters to ripen evenly. The yields this year were way down so our 2015 wines were highly allocated to our Friends members.

In 2014, we experienced a rather early harvest with excellent quality and a terrific depth of flavor.  The yield was exceptional with big, juicy grapes and many clusters on the vine.  The weather was good throughout the season, albeit light in rain. With the wine now resting comfortable in barrel, Winemaker Tim Milos is very optimistic about quality and richness for this vintage - we can't wait to release it! The 2014 vintage reflects the beauty of the season with a wonderful, full, Mouth feel that lingers on the back Palate. The wine drinks beautifully in its infancy.